As a hobbyist gunsmith, I wanted to try my hand at barrel threading. I had a Moisin Nagant that I w ...
May 7, 2019Verified Purchase
Review By TLC, 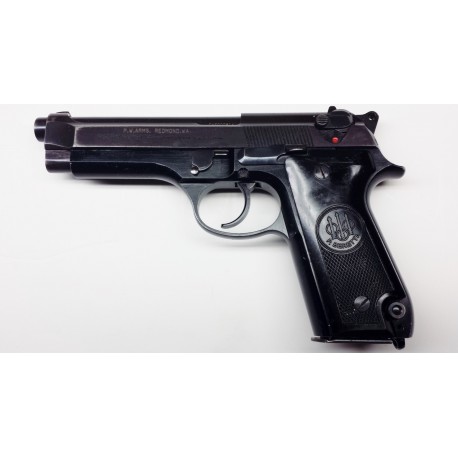 Symbol of reliability and accuracy, Chosen by the US ARMY over Smith & Wesson, Sig P226, Heckler & Koch, Walther, Steyr and Fabrique National, The Beretta 92 had to be able to survive exposure to temperatures from −40 to 140 °F, being soaked in salt water, being dropped repeatedly on concrete, and being buried in sand, mud and snow. Additionally, the 92 proved a MRBF (mean rounds before failure) of 35,000 rounds.That number is often touted as the equivalent to five or six times the pistol's service life. While this is normally true in European militaries, armed forces of the United States normally subject sidearms to much more extensive use. It past those tests with flying colors! The Iraq War, which featured frequent urban and room-to-room combat, has required American soldiers to rely more heavily on their Beretta 92 pistols.

Beretta Model 92S Special Ops in Woodland Tan 9mm Semi-Auto Pistol, in Very Good condition, With 1 Mag - Very Good Used Surplus What a deal. It is not often that you can find such a legendary firearm at such a great price. We are told that these are Special Ops trade ins from Elite Italian Law Enforcement Agencies. We are also told that they have been back to the Beretta facility for functional testing. The samples we have checked perform flawlessly and are very nice and smooth.

Cosmetically they are still in turn in condition.

Now you can own one at a fraction of a the cost!!

The Beretta Pistol Model 92S has also the following characteristics:

Which offers the advantages of the revolver, Furthermore, this system allows the possibility of a second quick strike on the same ammunition in the rare instance of misfire which, in view of the high level of quality reached in ammunition today, can practically happen only because of the capsule. The repetition of percussion is sufficient to fire the round.

(holds 15 rounds). With the same length as a traditional magazine, it almost doubles the capacity of fire.

Extremely quick and simple. It is designed in such a way as to avoid casual or involuntary disassembly.

It gives the advantage of enabling to release the hammer with the maximum safety when there is a round in the chamber.

Although depending to a certain extent on the type and the quality of the ammunition and local atmospheric conditions, they are the optimum obtainable from a firearm of this size.

In normal conditions of use, the average velocity and corresponding kinetic energy of the ammunition fired from this firearm are as follows: V 0.5 = 1280 f t/sec E 0.5 = 492 f t /lbs.

Share your review on Facebook and get voucher for discount 5 % , valid for 15 days
Write a Review
No reviews for the product

Be the first to write your review !